Évora is one of the jewels of Portugal, located in the Alentejo region, full of architectural and cultural works. It is a museum city, surrounded by a wall, considered a world heritage site by Unesco in 1986.

The city of Évora was founded in 1166, with roots dating back to Roman times. It lived its golden age in the 16th century, when it was the residence of Portuguese kings. It has just over 50,000 inhabitants and is one of the richest cities in Portugal in terms of monuments.

One of the main highlights of Évora Portugal is the Capela dos Ossos, with its walls decorated with human bones. Other important attractions are the Cathedral of Évora, the Água de Prata Aqueduct, the Roman ruins.

The city was officially founded in 1166, but its history goes back more than 5 millennia, as evidenced by megalithic monuments close to the city.

However, in the history of the city, the oldest archaeological remains are from the Roman era (between the 2nd century BC and the 5th century AD), with emphasis on the ruins of the Roman temple from the 1st century, still imposing in the center of the city.

After the Romans there was a time of Muslim domination. In 1166 was the date of the Christian reconquest, when Évora was taken from the Moors, the official date of the founding of the city. Between the 13th and 14th centuries, the Cathedral of Évora was built. 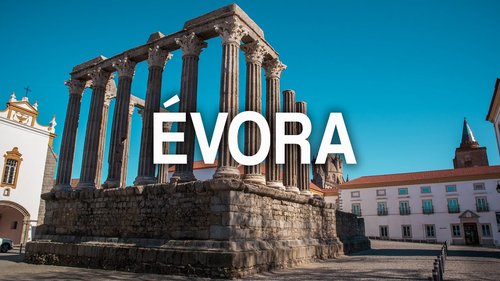 Évora is 137 km from Lisbon and is one of the main trips from the capital of Portugal. There are options to travel by train, bus, car, or even through tours from Lisbon.

Train: Departure is at Lisboa – Sete Rios station (which connects to Jardim Zoológico metro station on the blue line). The journey takes 1:20h to Évora station and the cost is 12.50 Euros. Check timetables on the Comboios Portugal website

Bus: Rede Expressos has lines that depart from the Lisbon – Sete Rios terminal to Évora, in Alentejo. Travel time is 1:30 h and the price is 12.50 Euros.