Dr. José Boavida is a Neurodevelopmental Pediatrician who graduated as an MD from the University of Coimbra, School of Medicine. He specialized in Neurodevelopmental Disabilities and became one of the best well-known pediatricians in the area, in Portugal. His 2 major areas of interest are ADHD and Early Childhood Intervention (ECI).

He started in 1989 a community based, intersectoral ECI project in the Coimbra Region that led to the Portuguese legislation on ECI and became the precursor of the National System of Early Childhood Intervention (SNIPI). He is the Health Commissioner in the Coordinating Committee of SNIPI. He was the founder the National Association of Early Intervention (ANIP), the only Portuguese association specialized in the field of ECI as well as one of the founders of the European Association of ECI (Eurlyaid - EAECI). As a consultant of the Board of Eurlyaid, Dr. Boavida collaborates internationally in multiple projects of ECI (Ukraine, Bulgaria, Slovakia, Hungary, Romania, Poland, Belarus, Moldova, Spain, Brazil, Paraguay and others).

He is the founder and the head of the ADHD Clinic at Coimbra Children’s Hospital, Child Development Center, the major organizer of the National’s Portuguese biggest conferences about ADHD and he’s the founder and President of the Portuguese Society of Attention Deficit.

In response to various invitations, Dr. Boavida has been given hundreds of lectures, workshops, and training in Portugal and abroad, most of them in topics related to ADHD and Early Childhood intervention as well as contributions to research and professional education about ADHD and ECI. 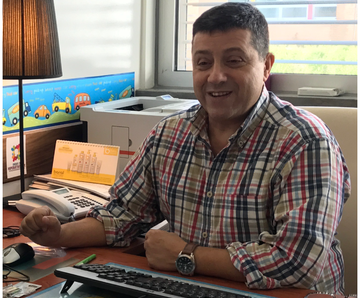